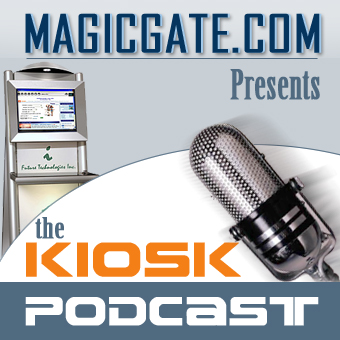 Skip Kimpel is a technology leader and industry disrupter with more than 20 years of strategic and hands-on experience delivering systems and programs that propel a company’s productivity and competitive advantage.

Kiosk Podcast Episode Five Show Notes
Kiosk Podcast Episode Five, February 22nd, 2006
Greetings
Who I am
Website location
We posted a bonus episode this last week, episode number 4….
News:
Hewlett-Packard Co. on Wednesday announced its entry into the $35 billion retail-photo-printing market, introducing a self-service photo kiosk and an in-store photo studio that will initially installed in Albertsons Inc. supermarkets and Longs Drug Stores
http://today.reuters.co.uk/news/NewsArticle.aspx?type=technologyNews&storyID=2006-02-23T020535Z_01_N21195865_RTRIDST_0_TECH-HEWLETTPACKARD-DC.XML
Continental Airlines has speeded up its deployment of passenger ticketing kiosks at airports using application acceleration technology.
The airline has been able to deliver four times as many eService kiosks at one-third of the cost using technology from IT firm Expand Networks.
The accelerators have also increased the speed that the kiosks process information and download data by 10 times.
When passengers use the self-service check-in kiosks, systems need to confirm information stored on Continental Airlines’ ticketing database in North Carolina via its secure wide area network.
Expand Networks’ accelerators compress, cache and speed up data and graphics traveling between the airline’s reservation system and airports.
http://www.vnunet.com/computing/news/2150801/airline-speeds-self-service
Further strengthening its leadership position in retail digital printing, Eastman Kodak Company today announced the introduction of KODAK Digital Picture Center, a customizable modular kiosk system, and the KODAK Picture Kiosk G4 Version 1.0 Software upgrade. The Digital Picture Center includes a “multi station” concept that will virtually revolutionize how retailers use kiosks to make it quick and easy for consumers to print digital pictures. Specifically, the new configuration allows a retailer to connect several Order Stations to a common bank of printers, reducing queue times and improving throughput.
http://www.imaging-resource.com/NEWS/1140181204.html
PMA 2006 Photo Kiosk Central, Orange County Convention Center in Orlando, Florida Feb 26-March 1st: www.pmai.org/pma2006
10th Annual KioskCom at the Mandaly Bay, Las Vegas NV, April 10-12
Link: www.kioskcom.com
Kiosk Resource of the week:
http://www.gokis.net/self-service/kiosks/
Self Service Kiosk Information
Weekly Kiosk Experience:
Home Depot Store Kiosks, not mall kiosks… have not see one of those yet.
NCR Self Checkout systems
Over 800 Stores?
Had a problem with the scale… still takes person to monitor and help people out but has gotten much better.
Quick, easy, efficient
See more people in line for these than standing in line with a real person.
Featured Hardware:
Geist Manufacturing
Power distribution solutions
Also have remote reboot, ip addressable units
http://www.Geistmfg.com
Featured Enclosure:
Planar
The Planar DS15 Touch Computer with integrated content management system
http://www.planar.com
Listener Feedback:
Joey Washington from Virginia asks: “In your rough estimate, how much does a kiosk cost?”
Carol from Canada asks: “Is there such a thing as a computer built into a touch screen?”
Hans Touton from Sweden asks: “Is it common for a kiosk enclosure company to be separate from a software development company? Let me explain… We are looking for a kiosk solution for our company, however, most of the companies we talk to do not put together the entire package. We have talked to companies that make the boxes but they don’t produce the software. Is this normal?”
Closing Remarks
Show might not happen on Wednesday, due to getting back late Tuesday night.
Contact Info, email, 954-840-3677, website location: http://www.magicgate.com/podcast/
Don’t forget our other podcast, The Director Podcast
What to expect next: Next Monday and Tuesday we will be at the PMA show in Orlando so if you see us, stop us and say “hello”. We will be wearing the blue and white shirts that say “The Kiosk Podcast” and will probably be toting around a microphone. So until we see you there, signing off, this is Skip Kimpel from Magicgate Software telling you to always remember to create a kiosk with a user in mind.